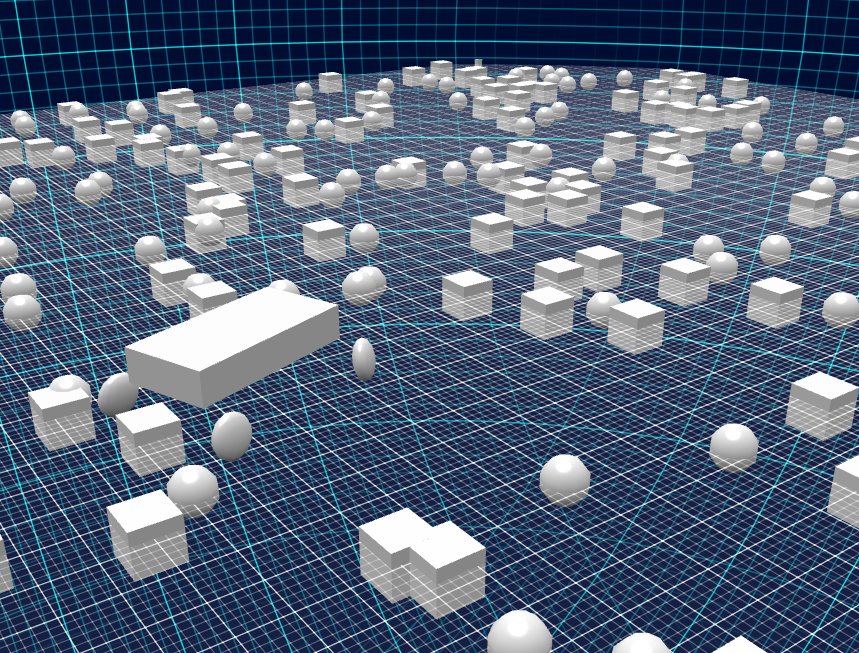 One of the first demos each physics engine is presenting is of a working car, driving on a predefined terrain. It is a wonderful demo, showing off impostors, joints, motors and integration with other frameworks.Let's see how to do that using Oimo.js and Babylon.js.

In this tutorial I will explain the implementation of the Oimo.js "All-Terrain" car using Babylon.js' new physics engine architecture. The demo, for the impatient readers, is here: http://www.babylonjs-playground.com/#SFELK#2 . As you can see, the car has working wheels, it can turn right and left (surprise!), and it has (kind-of) suspensions.

A quick note before I begin. Every time I present a new physics demo, I get asked the same question - why is everything based on simple geometric shapes? why is the car so "simple"?
A car is a complex object, it is not a simple box with 4 spheres for wheels. And you are right! But not in the physics-engine world. I am showing just the impostors. Take the impostors, cover them with a nice mesh of a beautiful Ferrari (or a Lada, if that's your thing), and everything will look better. Deep inside thou, they will still be boxes and spheres.

Let's first cover the steps we need to take in order to reach our goal:

For the basic scene, we will require a simple flat ground, a few obstacles for our car, 4 wheels and one body:

Great, we now have the meshes we need and it all looks like this : http://www.babylonjs-playground.com/#1PVBTF

As I want to show how to build a car using Oimo.js, I will be using the OimoJSPlugin:

If you ask why undefined, it is due to pure laziness (and the fact that I want to show you, that you can be lazy too). Undefined (or null) will simply set the default gravity to be -9.81 in the Y axis, the standard gravity in our beautiful, beautiful world.

That's all it takes to enable physics, now we need to start defining impostors

Set up the impostors

I have a car, which is built using a single box (the car's body) and 4 wheels/spheres. As Oimo has only 3 impostor types - Box, Sphere and Cylinder, I think it is obvious which one we will take.

I define the ground and car's impostors like this:

We have now all of the impostors we need to continue, and our scene looks like this - http://www.babylonjs-playground.com/#1PVBTF#1
You will notice, that all meshes are simply free-falling until they touch the ground. This is because we haven'T connected the car using joints. Which is our next step!

Let's first see what movement we require and on what axes. This way we will understand better what joints we will require. 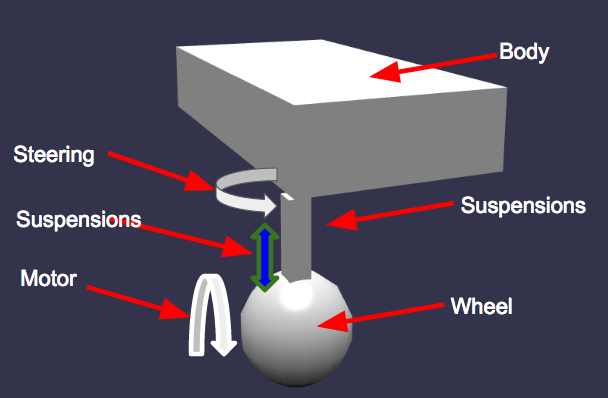 What joints correlate to these movement types? We have a few options:

(Note - great thanks to the ODE physics engine documentation. Without them no one would have joint illustrations)

Talking about suspensions, you might have noticed I haven't created them yet. Let's add them to the party, right after the last code we added. I will also make them invisible, so they would only server as the connection between the wheel and the car:

An oimo.js slider joint has another wonderful feature - a motor. A motor will enable angular movement. I will use this motor to enable steering. I will also limit the motorical angular movement, so that the steering direction will be limited as well. We don't want the steering to turn without stopping.

Let's see the definition of the first slider joint:
Testing

The main pivot is the point on the main physics impostor to which the 2nd body will be connected. Connecting two objects without defining the pivot will connect both at the center of their mass. This might be the desired functionality in various cases, but we want the suspension to start from the 4 edges of the car, and not from the middle of it. Here is a quick example to explain things:

Without pivot - http://www.babylonjs-playground.com/#BGUY , the sphere will be connected to the center of the object. This means that they are both connected in their 0,0,0 position (in local coordinates). But What if we want to connect the sphere to a different point of the log? Here it is with pivot defined: http://www.babylonjs-playground.com/#BGUY#1
If it is not understandable now, please leave a comment!

So the main pivot is the edge of the car's body.

The slider joint has one axis defined. As I require the movement on the y axis, the axis I chose was (0, -1, 0). If you wonder why -1 and not 1, it is due to the way I am connecting the two obejct - which object is the main one. The movement should happen on the Y axis, that is true, but towards the floor, and not towards the sky. And as I am connecting the body to the suspensions (the car's body is the main impostor) the axis is actually -1 on the y axis.

There are 3 other slider joints, all with the same definition (but with a different pivot, of course). Then we are done connecting the car to the suspensions.

To connect the wheel and the suspensions I will use a hinge joint.
A hinge joint is also a motor enabled joint, which means that it can move in a specific direction, if provided with the right parameters.

Let's see how I defined the joint:

When adding all 4, you will notice something very interesting:
http://www.babylonjs-playground.com/#1PVBTF#2
The joints struggle to stay in place.
Oimo's default number of iterations (10) doesn't allow it to process the joint constraints correctly. If you notice that your joints are "losing" their axis, try increasing the number of iteratiosn the engine is running per frame. This might (might!) hurt performance, but if you need a car, there is no way out of this. (Note - Oimo themselves solve it differently - they run a "correction" function to keep the wheels in place. I find this method to be a hack. Hacks are great, but not the best solutions in the world).
To increas the number of iterations, set the first variable in OimoJSPlugin constructor:

Notice how the suspensions are now in tact and stay in the y axis: http://www.babylonjs-playground.com/#1PVBTF#3

You might notice that the car goes crazy after a while. We will take care of that in a second when we enable user input.

I want my car to drive! so it is time to enable the user input. I always prefer the arrow keys on WASD, but it's really up to you if you want to change it.

The main concept - with keyDown the engine will start moving forward (or steering will be triggered). With keyUp the movement will be reset.

Now I can move the car forward and backwards. If the ground is too slippery for you, add some friction! You could also add mass to the wheels to keep them firm on the ground.
I can also steer, with an angle changing over time. Try it yourself!

The car I built is a 4x4 suspended car. Now we need to test it!

Let's add a few objects in the way:

And now we have a few obstacles in the way: http://www.babylonjs-playground.com/#1PVBTF#6 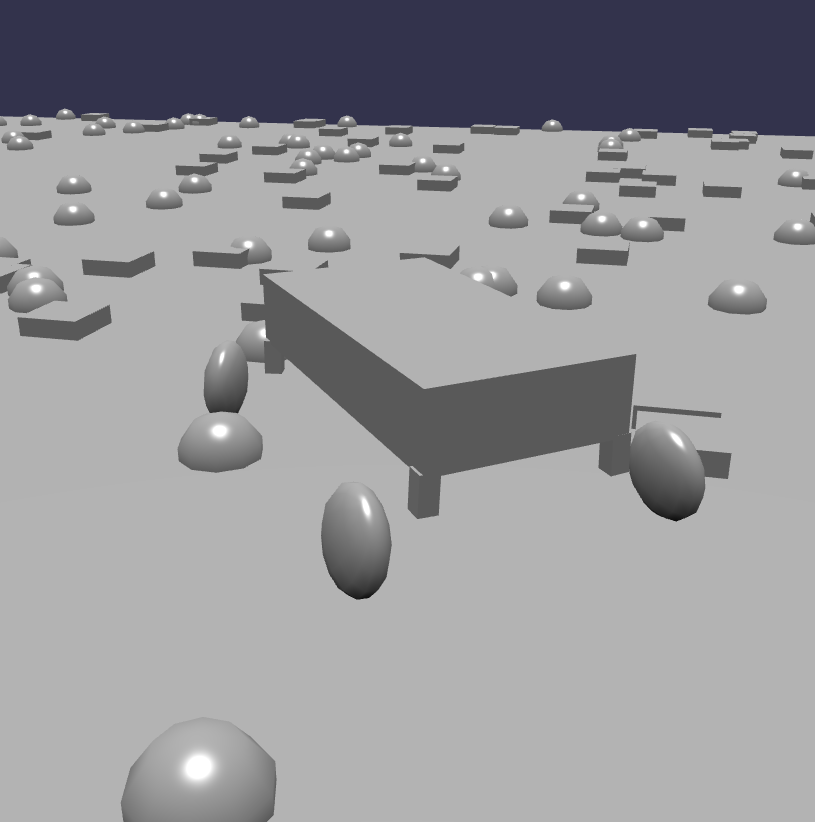 There are a few improvements I can implement rather easily
First, you would notice that when pressing forward the camera moves as well.
To cancel that simply cancel the camera movement keys. The simplest way is... to reset the keys arrays:

We can add a camera that will server as a first-person camera, like we are the drivers. I have created two cameras. a regular free camera, and a "virtual reality" camera that can be moved with a cell phone:

Notice that I set the car's body AND the holders invisible.

Now I have a very simple car implemented in Oimo.js and Babylon.js. This is a very simple demo and a very simple tutorial just to get you started. Of course there is a lot more to do.
I hope I managed to teach a bit about the constraints/joints and how to use them. If you have any questions, please write them in the comments and I will answer as soon as I can!

How to potentialy solve an error during deployment after upgrading firebase-tools to update your firebase website.